History of the Democratic Party

Both Republics and Democracies provide a system where citizens are represented by elected officials sworn to protect their interests. In a pure democracy, laws are made directly by the majority leaving the rights of the minority largely unprotected.

In a Republic, laws are made by representatives chosen by the people and must comply with a constitution that specifically protects the rights of the minority from the will of the majority. The United States is best described as a “representative democracy.”

They are the party of slavery, the civil war & Jim Crow laws. They opposed reconstruction, founded the Ku Klux Klan, voted against the 13th amendment (end slavery), 14th (black citizenship), the 15th (blacks right to vote). LBJ started the welfare state and said “I’ll have those n#@!rs voting Democrat for the next 200 years.”

If you’re a Democrat you’ll probably stop reading at this point. 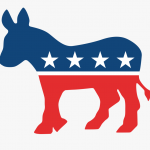 Democrats divide society to gain power. They use any crisis to increase the Federal Government & raise taxes.

The Civil War wasn’t North v. South, as highlighted in the Lincoln-Douglas debates. It was Democrat v. Republicans.